You are here: Home / Fashion / 4 Gadgets You Can Wear On Your Wrist 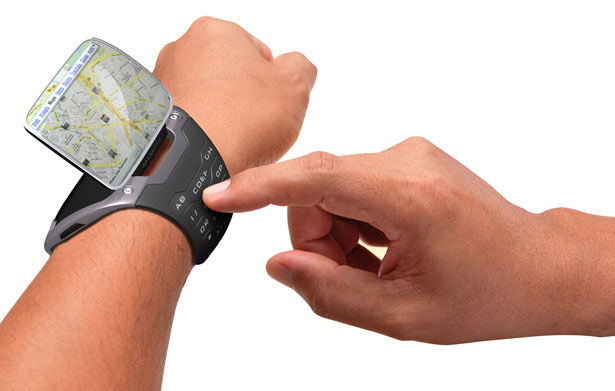 As technology becomes more and more advanced, the more it becomes integrated into more and more convenient forms.  Nowadays things that would once be required to be plugged in are not only portable but we can wear them on our bodies.

The popularity of gadgets that you can wear on your wrist is on the rise. These gadgets are not only handy but have fun designs and look no different from a normal bracelet.  They provide everything from increased productivity to expanding our imaginations and creativity.

Take a look at some of the coolest new gadgets on the market that you can wear on your wrist combining function and fashion. .

A USB stick allows you to carry large amounts of data in a very small package.  They have a variety of uses that make them incredibly handy.  And now that they make them in bracelet form, you can wear them on your wrist, making it possible to always have your data on hand without risking leaving it behind.

While once upon a time if you wanted to listen to music in your car you had to lug around a big case of CD’s, now many new cars are being manufactured with a USB plug in the radio box.  You can also plug them into the back of TV’s to easily share media, or carry important documents to meetings or appointments.

A FitBit is the original fitness tracker which has a variety of incarnations which can be worn in your pocket, clipped to your pants, or most recently, worn on your wrist.  Because of its sleek design, it looks just like an ordinary watch or bracelet. Also, if you were to look around online at somewhere such as Mobile Mob you’ll be able to see that you can highly customize your FitBit models to your liking.

It is compatible with the FitBit app on a smartphone which monitors your heart rate, distances traveled, and steps taken in real time.  You can have competitions with friends, and even post your fitness stats directly to social media such as Twitter or Facebook.

With its newest model including an integrated heart rate monitor, you can achieve all your fitness goals in one little design whereas once upon a time you would have needed 3 different gadgets.

The first of it’s kind, the iWatch is a smartphone and a watch with a beautiful design and plenty of features.  Its latest model has built-in GPS, is water resistant, and boasts a variety of features to help you stay on top of your health and fitness game.

The Moff band is a wearable sound bracelet which functions with its iPhone app.  With a flick of the wrist, normal objects become imaginative playtime with engaging sound effects.

These are marketed for children but can also be worn by adults and provide hours of fun and creative play.

Hello to all you bloggers and readers out there. If you’re on this website, then you have some common interests with me about fashion and makeup, girly stuff. My name is Amy … END_OF_DOCUMENT_TOKEN_TO_BE_REPLACED