You are here: Home / Fashion / Anything goes at London Fashion Week 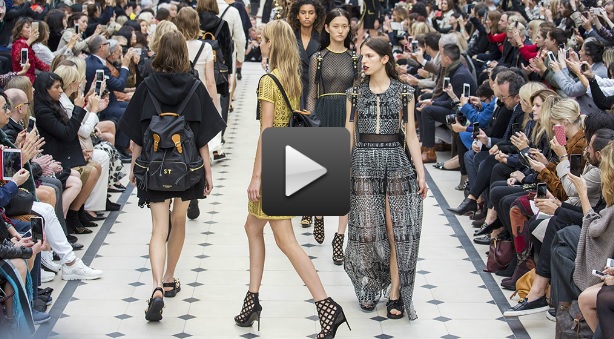 It didn’t need Christopher Kane to tell us that trainers were having a moment. His were a clash of DayGlo colour, worn with similarly popping mash-up dresses. It was a combo that — what with the catwalk lights — felt like a migraine in the making, albeit a fabulous one. (Sitting front row is blinding at the best of times thanks to those lights. Ever wondered why Anna Wintour keeps her sunglasses on?)

Trainers were ubiquitous among the fashion pack this week, and they were of the most unassuming variety. Gone were the swanky designer iterations. It was all about adidas shelltoes and Stan Smiths (still), and they had to be ever-so-slightly worn in, the better to Keep It Real (fashion’s current fixation, of which more later).

Was it also because Fashion HQ for the past few days has been a car park in Soho, complete with 60-degree ramp, and that even the most dedicated heel-wearer knows that ramp + four inches of heel = a disaster in the making? (I speak from experience.) Certainly, there’s nothing more down-to-earth than a fashion week in a car park. So London, so edgy. Though the Soho NCP had been de-edged right up to the wire, as evidenced by the wet paint that came off on some very expensive sleeves on the first day. And the VIP area had been given some it-boutique-ness courtesy of Alex Eagle, proprietress of the capital’s hottest (eponymous) shopping destination: mid-century masterpieces by Jean Prouvé and Charlotte Perriand, plus sheepskin. Fashion’s idea of keeping it real is, when all said and done, not that real.

Even so, if there is a metaphor for where fashion’s head is at right now, it is the heel, or lack thereof. People were dressing down, literally as well as metaphorically. So when it wasn’t trainers, it was flats, on and off the catwalk.

Super-slides were particularly in favour with the fashion pack, especially Alexander McQueen’s and Birkenstock’s baby pink and blue furry ones. (Sandals and socks for winter is now considered on-trend, it seems, not tragic. Jeremy Corbyn has truly captured the mood of the nation.) There were plenty of new-gen options on the catwalk to covet for next season, too: bright platform slides at Paul Smith, chain-adorned black sandals at Burberry; Hunter Original had even come up with its own version of the Croc.

Street style remains a thing — as evidenced by the fact that you still have to fight your way through dozens of photographers to get into a show — but, as one magazine fashion editor told me: “It just feels right at the moment to be more low key.” Besides, she continued, “No one can be bothered to borrow clothes any more.”

I know! Non-real world alert! Lots of magazine fashion editors normally call in clothes from their favourite designers especially for the shows, in order to maintain their street-style profile. That explains how women who earn comparatively ordinary salaries can wear such extraordinary clothes day after day — discounts only get you so far. (One of the British street-style biggies plans in advance every single outfit for every single day of the month-long fashion weeks.)

But things are shifting. No one wants to look like they are trying too hard. Take Lou Stoppard, on-point editrice at the avant-garde SHOWstudio, and never one for dolly dressing at the best of times. Where were her minimalist black trousers and top from, I asked at the opening of the lovely new Simone Rocha shop (which only has the three Francis Bacons on the wall downstairs). Comme des Garçons, perhaps? “Er, Brora!” she laughed.

Stoppard was also suffering from an unusual fashion week affliction. A few days earlier she had had a couple of new upper ear piercings. “They were fine until the shows started,” she told me. “But then people started air-kissing me and they have become really sore.” Ouch.

So what was ringing the designers’ bells this week? Sleeves were a focus, be they extravagantly leg of mutton at JW Anderson, short and flared at Peter Pilotto, or Game of Thrones bell-bottom at Giles. (No doubt the designer is a devotee of the series, given that he dates Gwendoline Christie, aka Brienne of Tarth.)

Shoulders were the erogenous zone of choice, which meant lots of halternecks (at Mary Katrantzou and Antonio Berardi to name but two), plus flesh-exposing cutaway sections. Small unexpected patches of bare skin are the way that many designers are choosing to add a subtle brand of sexiness; Emilia Wickstead’s normally prim dresses revealed a slim crescent moon of stomach, Preen’s dresses some of that shoulder. Both collections were beautiful takes on modern femininity, full of the covetable dresses with which the designers have made their names. The former was, as at Christopher Kane, a crayon box of colour (albeit here more gently rendered), the latter monochrome in focus; particularly sublime was a patchworked black velvet and lace dress.

Unusually, Burberry also walked on the dark side, with lots of black brought to life via elegant gilding on seams and detailing. Lineisy Montero, the Dominican 19-year-old who is the hottest model of the season so far — she also walked at everything from JW Anderson to Versus this week — wore a black coat with gold embroidery.

The palette was similarly crepuscular at Versus — which offset its usual slash-and-burn dresses with some wearable black floral separates. Erdem showed stunning black-and-white lace floor-sweepers that were just about visible through the twilight levels of illumination. (Cue frustration from all those Instagram-addicted front-rowers who couldn’t take a picture good enough to post.)

Burberry got a gold star for the show itself, as always, with Alison Moyet performing (in a black and gold trench, natch), and a stellar front row that ran the gamut from Kate Moss to Benedict Cumberbatch by way of Samantha Cameron. The prime minister’s wife appeared undeterred by Pig-gate, and was looking the very opposite of porcine in a sleek red Victoria Beckham dress.

Another memorable production was Christopher Kane’s show: he demoed his hipster reinvention of laciness — patchworked and luminous — in the tropical gardens on the 35th floor of the so-called Walkie Talkie. (It’s much better on the inside than it is from the outside, I can now report.) Kane used colourful plastic ties as DIY fastenings on jackets and dresses, and as impromptu jewellery. (Simone Rocha was doing Stuff with Plastic too, so head to your local Poundshop if you want to steal a march on this one.)

Preen also backdropped the effortless nowness of its collection with the architectural zeitgeist that is City Hall or, as Boris Johnson once referred to it, “the Glass Gonad”. (That was if you weren’t too bleary-eyed to notice architecture, testicular or otherwise, at 9am on a Sunday morning.)

Both Preen and Christopher Kane took elements that should be dressy, fusty even — such as lace — and made them seem, if not exactly laid back, then certainly cool. Simone Rocha did the same, rendering rose-tinted princess dresses positively cutting edge. Ditto Roksanda with dresses of frayed chiffon ruffles, Burberry with more unwidowy black lace. (Roksanda and Burberry also showed splashes of sunshine yellow, a key shade for the new season.)

It’s something the current generation of British designers is particularly good at, 21st-century glamour: sumptuous clothes that still look easy enough to be worn straight from the office to a cocktail party. Though in truth the average office would, of course, come to a standstill if you turned up dressed like a latterday Elsa from Frozen, not to mention The Little Mermaid’s Ariel courtesy of one of JW Anderson’s outré clam-shell-bra tops. (Just to reiterate, fashion’s “real” isn’t our real.)

One of the jolliest shows was the launch of the new handbag line Hill & Friends by Emma Hill, the former Mulberry designer. At an all-pink breakfast at Claridge’s, the VIP guestlist ate every little girl’s fantasy breakfast (fried egg and bacon-shaped biscuits) and watched uniformed bellboys carry the bags past on trays. The last bellboy got the short straw: he was almost pulled off his feet by two frisky — and no doubt utterly bemused — Shetland ponies on a lead. Golly, those ponies were cute though. And given the fashion pack’s love of small dogs — a current Instagram favourite is @lifeofjinkee, a toy poodle — it is probably only a matter of time before a few of them get themselves a Shettie (sic).

Those fashion regulars who hadn’t received the “low-key” memo, and were still upping the ante, personal style-wise, ran the gamut. The stylist Martha Ward was the ultimate in girliness in a white chiffon skirt embroidered with cartoonish mermaids by rising star Alexander Lewis. Julia Sarr-Jamois of i-D magazine, in contrast, channelled luxe-street in her lion-print green duvet jacket by skater boy favourite Supreme. (Ward’s handbag was London Fashion Week’s most carried, the echt-tasteful Chloé Drew; Sarr-Jamois had a stupendously untasteful rainbow of fake fur from Moschino Cheap and Chic.)

Anything goes these days, you see: it was all on the catwalk, it was all off the catwalk. Whoever you are, whatever your taste, there’s a trend out there for you somewhere. And if there isn’t, you can always invent one. That’s the only thing you need to take from London Fashion Week, thank goodness.

Hello to all you bloggers and readers out there. If you’re on this website, then you have some common interests with me about fashion and makeup, girly stuff. My name is Amy … END_OF_DOCUMENT_TOKEN_TO_BE_REPLACED