You are here: Home / Fashion / Beauty and the geek 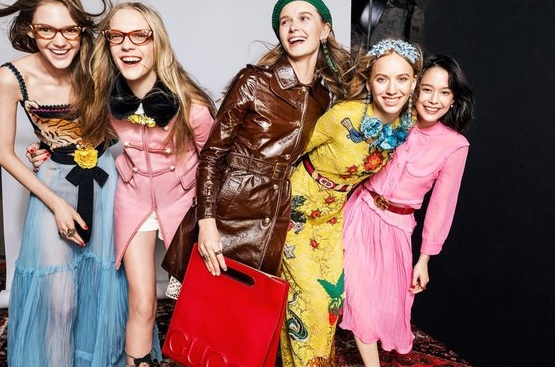 After years in Gucci’s back rooms, Alessandro Michele has put Italian fashion centre stage again. Meet the man reinventing the brand for a cooler generation.

When the bearded and bookish Alessandro Michele was anointed creative director at Gucci in January, the fashion industry uttered a collective “Alessandro who?”. Few had heard of the 42-year-old designer suddenly charged with overseeing every creative aspect of Italy’s best-known, but commercially flagging, label. Ten months on from that surprise appointment, he is the biggest star in fashion, having transformed the perception of Gucci completely.

Michele has implemented a velvet revolution: every seam of what the billion-dollar brand stood for under his predecessor, Frida Giannini, has been reimagined. He has swept aside her slick, sexy yet impersonal aesthetic and replaced it with his own geeky, androgynous, flea-market sense of individuality.

His clothes demand an emotional response. “I need to put something else in the idea of fashion. Fashion is about dresses, but it’s like a movie and you have to put some soul into those dresses. I feel that now fashion has a renaissance because customers really know and need beautiful, unique pieces,” he said backstage at his recent cruise show, held in a New York art gallery. The gangly, geeky models pictured here look as if they found their beautifully crafted clothes in the attic of an eccentric dowager aunt, jumbled them together and worn them out on the street between lectures at Parsons or NYU.

Michele describes what he does as “fake vintage”, because his designs have a link to the past, but are absolutely of the moment. “Old things make me feel very contemporary. It’s about that contradiction between the past and the future,” he says.

Michele has been particularly ingenious at reworking the house’s famous icons, which he calls “pop symbols”, adding, “I love them because they remind you of something that is superchic. Andy Warhol probably wanted to work like this.” The horsebit design is splashed across vintage-looking embroidered canvas bags, the famous double-G logo is rounded into bronze, 1970s-style lettering for belt buckles, and as for the striped Gucci webbing, it embellishes lace evening dresses, silver bomber jackets, garlanded headbands and bag straps. “I wanted to put it in unusual places, such as on a headband, like a very chic old woman would do,” he says.

His muses, he says, are the carefree heiresses of French and Italian wealth. “I love the way that the young generation don’t feel the pressure of that kind of richness. They are so chic that they don’t care about their hair. They talk about love and the way they want to live. They are very beautiful, intelligent, powerful young girls. You can find that kind of attitude in very old women, too, because they don’t care at the same time.” He likes to fold time and space, equating the eccentricities of age with the bravado of youth. No wonder he designs his collections to Mozart. “Mozart was the rock star of his era, like the Mick Jagger of his day, I am sure,” he says.

His risky Gucci makeover has been a huge success. Fashion insiders clamour to wear his quirky designs (you couldn’t move for his fur-trimmed loafers, double-G belts, full pleated skirts and embroidered heirloom-like bags at the recent round of fashion shows). Sales are rocketing and Gucci is revelling in the kind of white-hot fashion status it hasn’t enjoyed since the Tom Ford era. Gucci’s billionaire owner, François-Henri Pinault, toasted Michele at a recent dinner, saying, “I’m proud to see your creativity blossom, and to see you express your immense talent,” before praising the “sensitive and colourful vision” he was bringing to Gucci.

What is striking about Michele when you meet him is that he has the charisma of a prophet. His world view — that we can use beautiful craft to express our uniqueness — is infectious. It is all the more surprising that the man who has brought the glory back to Gucci had been working there all the time. How could they have kept him a secret for so long?

Michele was hired in 2002 by Ford to head the accessories department; he was Giannini’s first assistant before she suddenly exited in January after a period of declining sales. Michele may have known every inch of the Gucci archive, but he wasn’t even in the running for the top job, which pundits believed would go to a big fashion name such as Riccardo Tisci, Olivier Rousteing or Christopher Kane. “I wasn’t even on the list,” he told American Vogue recently. His interview with the new Gucci CEO, Marco Bizzarri, was meant to be a courtesy, but their hour-long chat turned into three hours on how Gucci could get its mojo back. Bizzarri was both charmed and convinced: “Fashion is about creating emotion — it’s not necessarily rational… I thought, ‘Why should I look for someone else when he can translate the heritage, and when the values of Gucci are in his veins?’”

Michele wasted no time in changing everything. His first collection of menswear, shown in January, which featured sheer lace blouses and patterned trouser suits, was done in five days. He presented his debut women’s-wear collection — part Margot Tenenbaum, part androgynous art geek — one month later, setting his new agenda with quirky, poetic designs. He had a little more time (three months) to work on his cruise collection and it shows. The fabrications and embroideries are exquisite. Multicoloured furs are embellished with crystals, lace backed with lamé and brocade bonded to lace. “I was thinking about a big baroque fusion of these fabrics,” he says, his own hands glinting with antique gold and diamond rings, which he stacks three to a finger. “You wear something really rich and then you don’t care.”

The result is an ultra-desirable mix of the old, new, expensive and quirky — each piece special but able to be worn many ways, by many different types of customer. That’s the idea, he says. He isn’t a fashion dictator telling us all exactly how to dress; instead, he sees his designs as beautiful tools of individual expression. “When you dress up, I am sure that every single person is thinking about the story that he or she wants to tell, which is sweet. The beauty is never-ending.” Nothing excites him more than seeing how his customers put his clothes together in their own way, particularly the Brits. “You can be free to dress how you want. I love English people, for example, because they are the most quirky people in the world, they don’t care. They just want to be unique.”

Michele was born in Rome in 1972. His mother was immersed in the glamour of the film industry as an assistant to an executive at Rank films, and he describes his father as being like a hippie shaman who knew every kind of birdsong. His aunt taught him to crochet as a way to channel his creative energy, and he still finds working with his hands relaxing, picking up needlepoint kits from Liberty on his frequent trips to London.

Having studied at the Accademia Costume e Moda in Rome, he wanted to be a costume designer before switching to fashion: “I was really in love with the beauty, and fashion is a piece of beauty.” He lives with his partner, an urban-planning professor, in a small apartment stuffed with vintage finds and 360 pairs of his shoes. It’s a few minutes’ walk from the grand Gucci headquarters, where the cultural changes he has effected are being felt throughout the organisation. He’s not interested in being a cosseted designer shut away in an ivory tower. The door to his office is open, and inside it’s strewn with oriental rugs, books and antiques, and dominated by a huge table that the whole design team can work at. And if his team needs him, “I always say yes. I never say no.”

Michele is clearly a people person. In an unprecedented move, he invited everyone backstage after his New York cruise show to see the workmanship on the clothes up close, have a drink and meet him. True to his word, he shook hands and chatted, comfortable with his new-found status. The pace of change is startling. He says he copes with the pressure by living in the moment. “Every day I work is a new day. I don’t care what will be tomorrow.”

The ripple effect of his success is being felt throughout the fashion industry. He and Bizzarri have turned the old idea that a big house needs a big-name designer on its head, paving the way for the recent appointment of a relative unknown, the Georgian-born designer Demna Gvasalia, at Balenciaga and blowing the field wide open for successors to Raf Simons at Dior and Alber Elbaz at Lanvin. Meanwhile Italian fashion is enjoying fresh relevance. Michele’s vintage-inspired styling has been copied by other designers and the high street. If you were wondering where the idea for all those pleated midiskirts and lace blouses came from, look no further than the Gucci catwalk.

It used to be the most sexually provocative label in fashion — remember when Tom Ford shaved a G in a model’s pubic hair for an advert? —but those days are gone. The sexiness it had become synonymous with has been replaced by sensuality. Michele’s lavish fabrications are a virtuoso display of what “made in Italy” really means. “It’s crazy,” he says of the company’s artisans. “You can ask everything. They have gold in their hands.” In focusing on craft, he  has restored a grandeur to Gucci that harks back to an earlier era in the 94-year-old label’s Florentine history than the jet-set one Ford and Giannini habitually mined. He has also made every cool kid in the world want a piece of it. As he says: “It’s time for this brand to tell another story. I’m changing everything.”

Hello to all you bloggers and readers out there. If you’re on this website, then you have some common interests with me about fashion and makeup, girly stuff. My name is Amy … END_OF_DOCUMENT_TOKEN_TO_BE_REPLACED