You are here: Home / Fashion / Can Amazon crack fashion? 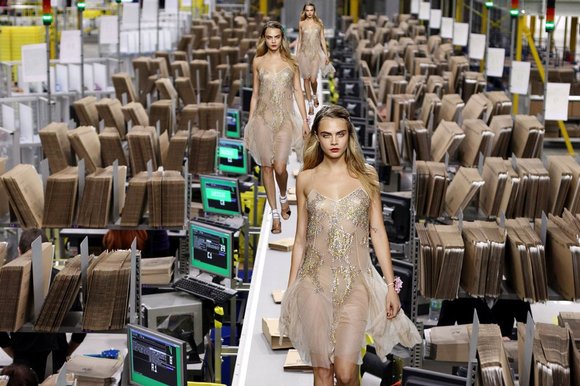 Ever thought of buying your dream Saint Laurent shoes on Amazon at the same time as ordering a cordless hedge trimmer? No, us neither. But soon, if the online global retail giant has anything to do with it, you might.

Ears began to prick up about this arrival on the fashion landscape two months ago, when Amazon announced the launch of a new menswear fashion week in New York in July that it will be sponsoring. With a little digging, it turned out that the brand had been recruiting heavy fashion artillery — including Julie Gilhart, the former fashion director of Barneys New York, as an adviser, and a former editor from American Vogue, as well as, rumour has it, a number of young London fashion insiders, too — in a bid to acquire some cool.

Last year, Amazon became a patron of the British Fashion Council, and this summer it will open a 46,000 sq ft fashion-photography studio for shooting products in Shoreditch, east London, to match the one it opened in Brooklyn, New York, two years ago.

What’s going on? “We want to give our customers the best fashion and style offer they can find on the web,” says Juliet Warkentin, Amazon Fashion EU’s brand and creative director. “A great selection at the right price, and get it to them as easily as everything else they receive from Amazon.” The target customer? Why, you, of course, and everybody you know.

This isn’t the first time the online retailer — which began selling clothes in 2008, but which, in the UK, still takes a trifling 0.6% share of the clothing market — has made a play for a piece of the fashion pie beyond its subsidiaries Shopbop, Zappos, MyHabit and East Dane. But it has never gone after it with so much enthusiasm. A couple of years ago, the Amazon founder, Jeff Bezos, told his biographer Brad Stone that to make Amazon — unbeaten winner on the high street, slayer of independent bookshops and everything else standing in its path — the $200bn company he wants it to be, “We’ve got to learn how to sell clothes and food.”

And finally, he’s ready. It’s a grand ambition: to “own” global fashion retail. Fans of Bezos know him as someone who has crazy ideas that pay off, but many are saying that, this time, he’s stretching the brand too far. “So far, Amazon’s strengths have been played in less complicated categories,” says Dr Tim Denison of the KPMG/Ipsos Retail Think Tank. “A book is a book. But fashion has far more variants, and it’s logistically more complicated. And while, once upon a time, you only needed to get 5 or 10 things right out of 20, now the competition is so stiff, you need 18 or 19. Fast delivery and a great platform aren’t enough. You need a deep knowledge of the landscape. And I’m not sure Amazon sees those subtleties.”

Observers have remarked that fashion and “everybody” aren’t two words you commonly see in the same sentence. Nuanced, capricious and fleet of foot, fashion marches to its own tune. Amazon, in the words of Jonathan Openshaw, editor of L:SN Global, has “built its business model on cheap bulk sales”. And while you don’t need to be cool to sell Frozen duvet covers, you do need to be cool to sell fashion.

Unless, that is, you talk to someone from Amazon Fashion. “Is there a divide between fashion and convenience?” says Warkentin. “I see them both as incredibly important, and I don’t think they conflict. Who says you can only have one or the other? We don’t.”

We all know that Amazon is good for convenience. Speed is a given: click to buy a Missoni skirt and it will arrive the next day, as quickly as a Game of Thrones box set. The retailer offers easy browsing, free delivery on goods costing more than £10, and the sort of generous free returns policy that has become a cornerstone of online retail.

You can bet that prices will be kept down (sorry, small manufacturers and designers who might feel the squeeze), but for the luxury customer there will be no upper limit. “We strive to offer the earth’s largest selection — if there is customer demand, we want to offer it,” says one of their buying team. Will it be cool though? “It feels very bargain bin-ish,” said one fashion editor about the website. It’s true, the layout and brands (this year it has added 100 more, including Levi’s, Ben Sherman, Vivienne Westwood and Missoni, but it doesn’t have the range or imagination of a truly great department store) are not yet what fashion dreams are built on.

Recent collaborations with Osman, who did a collection, and Solange Azagury-Partridge, who produced a line of five necklaces priced at £480, and a gig by the Kaiser Chiefs for the AW14 men’s collection, are Amazon’s efforts to redress that. It doesn’t help much that the Amazon brand itself is so fashion toxic — “A huge holding bay with little sense of curation or control, chock-full of fakes and knockoffs that it hasn’t really done enough to address,” as Openshaw describes it. Warketin distances Amazon Fashion from Amazon proper. “We’re a major retailer, and fashion people are buying from us every day as we build,” she says.

In the end, though, it’s us, the customers, who will decide if receiving a Paul & Joe top at the same time as a new sat nav is the way we want to go shopping for fashion. Is it unforgivable snobbery if we don’t want to? The signs are that want/click/buy is becoming the way we’re being taught to think about luxury fashion.

Warkentin says we need to think of style and fashion as two separate things: Amazon Fashion isn’t trying to be Net-a-porter. “You can make an assumption that it’s all about Gucci, but it’s as likely to be a great bomber jacket. I don’t want elite, I want the best products at the best price. Fashion is at the centre of culture, it’s the way we connect with the world.”

For many, that process of falling in love with a piece of clothing in a theatrical context and desiring it, then buying it and taking it home, is what the magic of fashion is all about. “Even with next-day delivery, you’re never going to get that,” says Denison.

Then again, soon it could all be irrelevant. Amazon scared the daylights out of the publishing industry by catching it by surprise. With or without Amazon, technology is about to change shopping for ever by bringing the experience of digital shopping alive, using tools such as avatars to try on clothes. “There’s no reason why a brand like Amazon can’t play a significant role in forming what these industries become,” says Openshaw.

But, for once, Amazon won’t be the first or the best. “The UK is a highly visible and, in fashion terms, very advanced, country,” says Denison. “It is going to be a tough one to crack. They think, ‘We’re Amazon, of course we can do it.’ But they should be careful.”

Hello to all you bloggers and readers out there. If you’re on this website, then you have some common interests with me about fashion and makeup, girly stuff. My name is Amy … END_OF_DOCUMENT_TOKEN_TO_BE_REPLACED