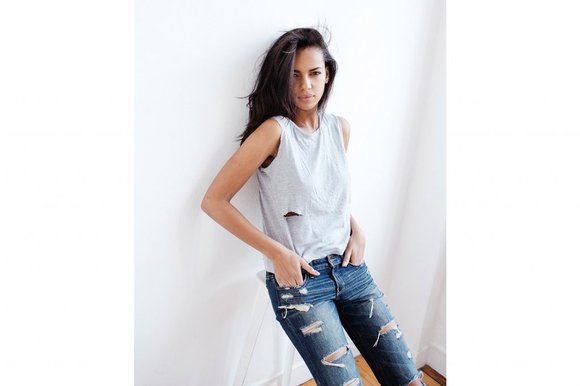 Our appetite for new clothes seems insatiable, but are we destroying the planet one T-shirt at a time? Why the fashion industry needs to change and start buying recycled apparel.

To the strains of a baroque ensemble, Anna Wintour wafts past the Rembrandts and the Velazquez adorning the walls of the Wallace Collection. Dressed in a pretty floral number, she joins a glamorous crowd that includes Lily Cole, Christopher Bailey, Natalie Massenet, Roland Mouret and Suki Waterhouse. But, as the party-goers try, under the watchful eyes of the stressed gallery guides, not to spill their bubbly on Franz Hals’s Laughing Cavalier, it becomes clear that this is not just another fashion-week jolly. Nor is it an ordinary gallery event.

The exhibits this time are not Old Masters, but outfits by Erdem Moralioglu with entirely green credentials, including a duchesse satin dress made from recycled plastic bottles and flowing gowns made of eco-silk and offcuts. The collection was created for the annual Green Carpet Challenge, which has top names demonstrating that sustainable fashion is possible and desirable. Past alumni include Sergio Rossi and Stella McCartney.

“It’s really important for fashion to change,” says Livia Firth, who, with her sustainable consultancy, Eco-Age, is the driver behind the event. Firth maintains that once they learn “green” ways, designers can’t go back. “I’m sure Erdem won’t look at waste in the same way again, having used a lot of textiles left over from previous collections,” she says, as she flops onto a sofa in a corner, taking a rest from all the glad-handing.

“I’ve always wanted my fashion to be timeless, but this was a real learning curve for me, a real eye-opener,” says Erdem, who had never used some of these materials before.

So, green is the new black, then? Again? Really? We have heard about this before. In the past few years, companies have been trumpeting their green corporate social responsibility projects, their (often limited) purchase of organic cotton and special sustainable ranges. There’s even a term for insincere environmentalist box-ticking: greenwashing.

Fashion as it is made now blights the planet. An estimated 17%-20% of industrial water pollution comes from textile dyeing and treatment, and numerous toxic synthetic chemicals are used to turn the various raw materials into desirable textiles, many of which will be released untreated into the environment. Precious water resources are used copiously to produce cotton, a product that is thought of as comfortingly natural, but is an unusually pesticide- and insecticide-intensive crop.

“Growing conventional cotton uses 16% of the world’s insecticides and pesticides. It takes more than 3,900 litres of water to produce the average T-shirt. The fashion industry is the largest polluter after the oil industry,” claims Safia Minney, CEO of the pioneering ethical clothing brand People Tree.

Minney advises me to watch the documentary The True Cost, about the impact of fashion, “with a box of tissues”. I do and am startled to see how workers are beaten, poisoned and maimed in fashion’s quest for cheaper production.

It’s tricky getting hold of Leah Borromeo, an activist who made her name exposing global social ills. I finally find her in Bolivia, working on her latest project, but I want to talk about Dirty White Gold, her film about cotton. Her interest was sparked by the high rate of suicide among Indian cotton farmers – since 1995, nearly 300,000 have killed themselves to save their families from debt accrued as they struggle to afford the expensive pesticides and special seeds that are now the norm in non-organic cotton farming. Borromeo blames “the system and the industry that still thinks it is OK to screw over the people at the bottom to benefit the few at the top”.

“The system” includes sweatshops. Two years ago, 1,129 people died in the collapse of the Rana Plaza garment factory in Bangladesh. Beneath the rubble were not only bodies, but half-made garments for brands including Mango, Matalan and Primark.

“Fashion’s supply chain is even worse than technology’s,” says Rob Harrison, the co-founder of Ethical Consumer magazine, when I ask him to compare the clothing industry with the notorious iPad production chain. “Technology requires investment, but anyone can set up a couple of sewing machines. We’ve spent 10 years fighting Primark, and they have improved, but a cheaper alternative always comes along.”

Anna Wintour, Livia Firth, Erdem, Natalie Massenet and Sally Singer at last month’s Green Carpet Challenge (David M. Benett)The magazine has a product ranking system, based on criteria including environmental impact, animal health and workers’ rights. Its pages for high-street and designer clothes make depressing reading. No mainstream label scores more than 10.5 out of 20, but the magazine commends Marks & Spencer and Zara for their policies on supply-chain management, the living wage and toxic pollution. It’s difficult, however, to name the villains in an industry where production is so intertwined, fast-moving and global, with a perception that marketing a fashion product as purely ethical limits, rather than enhances, its prospects. Much of fashion has effectively become based on using a fantasy lifestyle to oversell ever cheaper garments often made by underpaid staff using environmentally unfriendly raw materials.

People Tree, with a healthy 16.5, tops the alternative-fashion section of the list, but, unlike the trendy organic and Fair Trade food brands, eco-fashion labels have remained truly niche. Surveys show that while consumers say they want to shop more ethically, most don’t. In increasing numbers, we chase a bargain without much thought to how prices keep falling. The fashion data company Dressipi found recently that we are spending an average 5% less than we used to on clothes, and yet we are able to buy 20% more, thanks to ever cheaper fast-fashion labels churning out 50 collections a year. Analysts talk of a selfie culture, with young people discarding clothes after one outing on social media. No wonder landfill is clogged up with non-biodegradable textiles.

Interestingly, while the negative publicity about industry malpractice and cynicism over “greenwashing” has forced some changes, it has also pushed those efforts underground, making it more difficult to inform customers.

I had several conversations at the Green Carpet event about brands afraid to highlight an area of improvement for fear of being slammed for shortcomings elsewhere. Some insiders privately told me of ethical projects being cancelled because they were attacked by campaigners interested in the one box they were unable to tick: “No one wants Panorama,” said one.

“It’s a shame, because things are changing,” says Christopher Raeburn, when I catch him after his catwalk show. Raeburn is known for his “upcycled” fashions made from quirky materials such as deconstructed old military jackets and parachute silk. He cites an increase in recycled fabrics at the trendsetting Premiere Vision textile fair in Paris, a growing interest in traditional crafts and a focus on local production. “If you look at the top tier of the fashion industry, a lot of things are now done in England.”

Some businesses are putting their heads above the parapet. In May, Kering, whose stable of brands includes Gucci and Saint Laurent, published an environmental profit-and-loss report, exposing the environmental damage done by its production system, but also highlighting efforts that have reduced pollution to 70% of the industry standard. It has open-sourced its methodology in an effort to spread and standardise the practice of reporting on environmental impact.

In theory, designer fashion has the potential to be greener than high street because items are made to last. But some high-street names are finding success: Marks & Spencer has won many friends with its trailblazing eco-conscious repositioning since 2007. Notably, M&S was not using Rana Plaza.

More fashion labels need to come into line, but how? International regulation seems unlikely for now. Technology is seen as another saviour, and there are some promising developments such as dry dyeing and longer-lasting “smart” clothes. But even if all brands suddenly greened up and sacrificed some of their substantial profits, it is hard to see how fashion can come in from the cold unless the fast-fashion juggernaut slows.

“We don’t need to consume fashion like food or a weekly shop. It’s unsustainable,” Minney says. “People are getting a bit uncomfortable with it all. They smell a rat.”

Back at the Wallace Collection, Livia Firth sighs. “Who needs all these clothes?” she asks. “Unfortunately, fast fashion is in the way of the big shift. Hopefully it will sooner or later realise that it is obsolete. It’s difficult, but Rome wasn’t built in a day.” And with that she leaps from the sofa and dives into the crowd, spreading her message until the last stragglers go home, leaving the Laughing Cavalier and friends alone to stare at the new dresses in their midst.

“Cotton is thought of as comfortingly natural, but it is an unusually pesticide- and insecticide-intensive crop”

“We don’t need to consume fashion like food or a weekly shop. It’s unsustainable. People are getting a bit uncomfortable with it all”

The Kering group, which includes the designer brands Gucci, Bottega Veneta, Alexander McQueen, Stella McCartney and Balenciaga, strives to be open about its environmental impact. Its latest report reveals the cost of its environmental footprint in 2013 was €773m.

Hello to all you bloggers and readers out there. If you’re on this website, then you have some common interests with me about fashion and makeup, girly stuff. My name is Amy … END_OF_DOCUMENT_TOKEN_TO_BE_REPLACED