You are here: Home / Fashion / Why I hate fashion 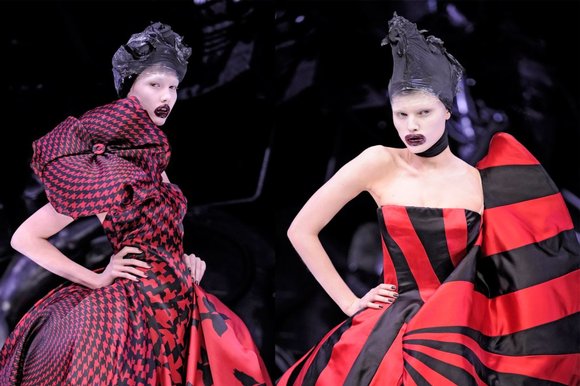 I despise fashion even more than football, which I consider to be the male equivalent. Never was so much attention paid by so many slavering addle-pates to the actions of so few self-adoring halfwits. By the way, before I get going, this isn’t some fat or financially embarrassed loser’s lament; neither physical nor fiscal limitations have caused me to feel this way. I despised fashion when I was a teenaged size 10 and a twentysomething size 12, and I still feel that way as a postmenopausal size 18. I haven’t had to look at a price tag since I was 25, but I decided what clothes I liked — tight, black, showing a bit of leg before dark and a bit of cleavage after — when I became a sentient being, and I’ve stuck to it. I don’t need to wear “interesting” clothes — for the simple fact that I am interesting.

How do I loathe fashion? Let me count the ways.

For a start, rag hags are totally humourless. Sometime in the 1980s, my then husband’s bezzie was dating Katharine Hamnett, who was at the time considered something of the bee’s knees for her singularly unimaginative slogan T-shirts.

“The young poor dress so much better than the young rich,” she announced at dinner one night, with the air of one used to having every half-formed thought recorded in gold on fine parchment by monks. “Only because they can’t afford your clothes,” I quipped. Her face! Mind you, Hamnett deserved respect on one level — she was one of a rare breed, a female fashion designer.

Has any profession ever been so smugly stitched up by men? Some of my best friends are gay (my best gay friend is a former fashion designer, more of which fascinating paradox later), but the sort of gynophobic gay man who is generally drawn to fashion feels this way not from a desire to gild the lily, but to gut it.

Looking at the recent star of the Dior show, the 14-year-old Israeli Sofia Mechetner (ironically, she may not even be able to model in Israel, since the government passed a law that took effect in 2013 banning the use of models with a BMI of less than 18.5), walking in a semi-sheer dress that transparently showed off her lack of physical maturity, it’s hard not to conclude that the general attitude fashion has towards women is, “No tits, no hips, no problem.”

With the arrival of such beautiful boy-to-girl models as Andreja Pejic and Lea T, the day is surely in sight when the fastidious emperors of haute couture will never have to work with actual smelly born women ever again, thus bypassing disgusting functions such as menstruation.

And it’s not just humans that fashion exploits, of course; in July, the actress Jane Birkin asked Hermès to rename the bag it has called after her for more than three decades — which costs from £14,000, with a vintage version recently selling for £144,000 — after reading a report into the alleged cruelty involved in the slaughter of the crocodiles the bags are made of (according to Peta, crammed into concrete pits and hacked to death — a claim that Hermès denies).

But “virtue signalling” — paying lip service to being a saint while acting like a scumbag — has never been bigger, and fashion is certainly filling its boots, with designers as disparate as Vivienne Westwood and Stella McCartney ceaselessly banging on about ecology while encouraging women to waste their money on new versions of things that don’t need replacing. Still, “green fashion” remains an even more outrageous oxymoron than “friendly fire”.

Time and again we are told by rag hags that clothes are a wonderful way for women to “express” themselves. How, exactly? Hemlines go up, then go down. So do heels. Clothes become androgynous, then feminine. Prints are back! Dresses are back! Trouser suits are back! Idea: why not just wear what you want? Wear what suits you? And express yourself through your words and deeds, perhaps? Blasphemy!

I was delighted to read in a recent fash-mag report on autumn/winter trends the immortal prose: “There were some great women in the olden days: Boadicea, Joan of Arc, Elizabeth I… we can aspire to their strength and wear clothes to match.” Yes, that’s right, by being a grown woman consigning herself to the role of eternal little girl playing with a dressing-up box, you’re really taking steps towards becoming the sort of woman who makes history. And they’re bothering to make Zoolander 2!

One of my dearest friends is the aforementioned retired self-made rag-trade multimillionaire, a man of great taste and intelligence with many excellent qualities, just two of them being the way he wears the same thing every day (albeit a bandbox-fresh version) and the way he hastily changes the subject whenever talk of clothes arises, with a look of absolute horror and boredom on his face.

I asked him what he missed least about being in fashion. He replied: “How long have you got? People talking about ‘must-haves’, ‘investment pieces’ and, worst of all, ‘hero pieces and hero product’. Idiotic PR and fashion press people wanting to make the brand sexy when what the customer wanted was something flattering and comfortable. Our retail staff had more nous and understanding of fashion than the whole Vogue editorial staff put together. Fashion does seem to attract a far higher than average amount of badly behaved monsters and neurotics, who take what is essentially something quite ephemeral very seriously. I think they’re disappointed that they spent all those years at art school doing fashion — the fashion students were deemed a bit lightweight — and went into a job that doesn’t quite have the intellectual cachet of fine art, so they have to invest themselves with airs and graces.”

In the 2008 film The Duchess, Keira Knightley’s Georgiana Cavendish says bitterly: “You men have so many ways of expressing yourself, whereas we must make do with our hats and dresses.” And that was about the 18th century.

Sad indeed is the modern woman who sees fashion as a means of self-expression, rather than an agent of social control.

Why I love fashion by Justine Picardie

Coco Chanel in 1962: her 1926 little black dress was revolutionary (Corbis)It was Virginia Woolf who came up with the best defence of fashion, with her observation that clothes, “vain trifles as they seem”, have “more important offices than to merely keep us warm. They change our view of the world, and the world’s view of us.” Objectors might retort that clothes are not at all the same thing as fashion; but I think that Woolf would probably disagree, given her own keen interest in style and sartorial details, and her exploration of the links between what we wear and who we are, an awareness that she described as “frock consciousness”.

This playful sense of fashion as a game that offers clues to identity, as well as potential disguises or surprises, seems to me to be a good starting point when it comes to considering our sometimes fraught relationship with clothes. It is also worth remembering that fashion should be a matter of choice, rather than an oppressive regime; after all, if you don’t like the look or feel of something because it is unflattering or in any way disagreeable, then you don’t have to wear it. By its very nature, fashion is fleeting, fragmented and eclectic, offering suggestions of what we might like to wear, rather than dictating uniform rules or regulations. It can be cheering — wearing piratical red to chase away the blues — and occasionally verging on the political. Hence the suffragettes’ decision to adopt purple, white and green as their battle colours — emblematic of dignity, purity and hope — and thereafter worn by thousands of women as they fought to gain the vote.

A century later, fashion is a vast global industry (in this country alone, the direct value of the UK fashion industry to the British economy is £26bn). As such, any attempt to define it runs the risk of lapsing into vague generalities. But while aspects of fashion are undeniably enraging — as Oscar Wilde complained, it can be “a form of ugliness so intolerable that we have to alter it every six months” — its very provocations might sometimes be a catalyst for change. What was punk, if not a form of fashion? (Though I must confess, as a teenager in 1977, when I wore ripped plastic jeans and safety-pin-studded T-shirts, I felt I was at the forefront of a revolution, rather than what turned out to be a brief rebellion against existing notions of style.)

Nowadays, as the editor of Harper’s Bazaar, I am fortunate to be part of a community of women — readers, writers, designers and more — for whom fashion is one part of a larger conversation that we share. For some, fashion verges on being an art form (which might explain the extraordinary success of Savage Beauty, the V&A’s recent exhibition of Alexander McQueen’s designs). For others, it plays a part in political debate, including the discussion as to whether fashion and feminism are incompatible. (I tend to think not, given that clothes can be powerfully expressive of subversion, rather than automatically symbolic of the status quo.)

At its greatest, fashion transcends the moment; as when Coco Chanel introduced her little black dress in 1926, a design that would be as wearable today as it was then. At the time, it seemed revolutionary — turning the traditional colour of mourning into a symbol of the jazz age and female independence; now, Chanel’s little black dress is an enduring classic and a remarkable example of how transitory fashion can evolve into timeless style. Yves Saint Laurent achieved something equally impressive with his signature tuxedo suit, le smoking, with its pioneering androgynous appeal and sinuous yet sculptural lines. First shown in 1966, it remains just as beguiling, as is evident in the new exhibition of his work at the Bowes Museum in Barnard Castle.

“Over the years I have learnt that what is important in a dress is the woman who is wearing it,” remarked Saint Laurent, who also said, “Isn’t elegance forgetting what one is wearing?” He was, of course, entirely right in these matters; although I might add that another way to feel at ease in one’s clothes is to wear something effortlessly chic and immensely comfortable. The two need not be mutually exclusive, as Saint Laurent and Chanel, among others, have proved over and over again. Clothes, at their most basic, are a means of keeping warm and protecting our bodies, but fashion has an unusual capacity both to conceal or reveal something of our truest selves.
Justine Picardie is the editor-in-chief of Harper’s Bazaar and the author of Coco Chanel: The Legend and the Life (HarperCollins £9.99). To order for £9.89 including free postage visit thetimes.co.uk/bookshop or call The Sunday Times Bookshop on 0845 2712135

Hello to all you bloggers and readers out there. If you’re on this website, then you have some common interests with me about fashion and makeup, girly stuff. My name is Amy … END_OF_DOCUMENT_TOKEN_TO_BE_REPLACED